Yannis Kounellis’s untitled site-specific installation now at the Museum of Cycladic Art until September 30th is being presented as a response to the turbulent times in which the Greek people are living, a mordant commentary on the crisis that has befallen us. “The exhibition is not mournful,” Kounellis has said, “it is harsh.”

But it is difficult not to feel the sense of loss that imbues this powerful one-act (as the artist preferred to call his installations) tragedy. And there is no mistaking the presence of death. Death is the first thing you encounter as you enter the elegant Stathatos mansion which houses the exhibition, a grand townhouse which was first built for one of the oldest and wealthiest of Athens families and which in recent years has hosted exhibitions by contemporary artists such as Louise Bourgeois and the deste finalists.

Set in the entrance hall and exactly aligned with a virtual path that runs like the trajectory of an arrow from the outer staircase up through the museum’s doors and into the entrance hall, is a grave. Literally, it is a concentric ring of coal-filled burlap sacks that contain a mound of earth. On the top of this mound lies an uninscribed rectangular slab of marble, a toppled unmarked stele. The slab is set like a two-headed compass onto the mound, pointing at the same time to the city outside the building and to the continuation of the installation within and above.

The mound seems to recall in miniature the ancient tells of abandoned settlements that testify to the life and death of a city that no longer exists: the heaped debris of razed houses, collapsed walls and urban rubble, long since eroded and now covered in earth.

The plangent yet defiant dyad of loss and witness that is evoked by this anonymous tumulus forms the theme of a threnody whose variations are developed in the adjoining rooms on the ground floor. In one, the coal-filled sacks, again arranged in a circle, enclose a heap of plaster fragments, broken replicas of busts of ancient god (I think of them as variants of Apollo), lying half-wrapped in pieces of yesterday’s newspapers. You can make out a few words from the newsprint visible between the white shards: ‘foreign interest’, “opinions”, “complicity”.  This is certainly not coincidental.

The heap of shards looks like a cargo of pottery fragments from an ancient shipwreck, the unhappy end of one of countless shiploads of cultural artifacts that crossed the Mediterranean in Antiquity. And the mound arguably plays on the association between trade and culture, indeed, the trade in culture, the commercial exploitation of s cultural legacy; after all, the pieces of statuary are circumscribed by coffee sacks—a symbol par excellence of commodity trading  (some are emblazoned with a stencil that reads Côte d’Ivoire). But mostly the mound is a witness to what is no longer whole. Something has been lost, though we don’t know exactly it is. The sense that we control our destiny, the cultural identity we once fostered, the autonomy we once had?

Off to the side of the room stands a huge iron easel on which presumably an equally large canvas is set, though it is shrouded, as are the paintings in church on Good Friday. The shroud is made up of navy overcoats that have been stitched together with rough string. In a recent interview to Athens Voice before the exhibition opened Kounellis said that the only response to the terrifying is to howl, but what we have here is the silent cry of a masked painting, the untold stories of the nameless simple men who once wore these coats, the mute enigma of a crate of broken statues. If it is a howl, it is that of a nightmare, powerful but unvoiced.

The room off to the other side of the lobby also features a sack-enclosed mound, this one a pile of eyeglasses. There is something almost inconsolably sad about these glasses. Or horrifying, as they call to mind—or at least did for me—photographs taken at Auschwitz of piles of confiscated spectacles. On one wall hangs an inverted cross, at the base of which an oil lamp is set. It fills the space with the church-like scent of burning oil. Fragments from the Apollo replicas—a lock of hair, a nose, part of a jaw—have been affixed in a row along one of the other walls, held in place by a cruciform wire bracket. It is hard say whether the fragments in this via dolorosa of statuary serve as witnesses to a crime or votive offerings for salvation, but their presence reinforces the sacral (sacrificial?) aura of the space.

The last mound is set in the mansion’s atrium, a grand space lined on one side by panels of opalescent glass that are etched with delicate fronds and ribbons and set above a bank of pattern ferns. The mound is entirely shrouded in black cloth, as is the chandelier handing from the ceiling above. Kounellis talks of these mounds as “four dervishes dancing through the space [of the installation]”. But if so, they are prophets dancing under heavens clothed in blackness (Is 50:3).

The signs of absence are even more manifest on the second floor of the installation, where the focus of the narrative becomes more individual.  In one room a row of black wool overcoats hang forlorn on butcher’s hooks on each of the walls. A large rock occupies the seat on a simple chair. A line of worn brogues and felt fedoras are displayed in an eerily illuminated case framed by drapes in the same mournful black cloth. Whoever had these shoes took care of them. Though the leather is worn in spots and the lining frayed, and even a shoelace goes missing here and there, they are not terribly scuffed. They are the Sunday shoes of men of limited means, cared for over a lifetime.

I can’t decide whether the assembly of shoes and hats is curatorial or commercial, an exhibition case for the belongings of the anonymously departed or funereal shop window. But regardless, the ghosts are there. Their presence is almost palpable. We see their traces everywhere and though the installation does not contain a single human image (Apollo is a god, and his shards don’t count), I’ve found myself conjuring up faces as I moved from room to room. The installation is haunted.

Kounellis, who began as a painter, once said that all painting is a ghost. I suppose by this he meant that painters incorporate and recapitulate techniques and achievements of earlier generations of artists and movements, even when they expand the boundaries of the art of their own age; every painting thus bears traces of—is haunted by—the paintings of the past. But one could say that thisinstallation is haunted as much by Kounellis’s own past works as it is by the tradition (and predecessors of) arte povera.

The inventory of humble materials—the burlap coffee bags, the chunks of coal, the plaster replicas of an ancient god, the second-hand overcoats and hats and shoes, the empty bottles—have long featured in Kounellis’s work. They are somehow universal and timeless, simple basic things we mine or grow or weave or make, the work of laborers and farmers and artisans.  Even the mound has figured in earlier installations, including the 1993 work on exhibit last year in the Polyglossia show at the Onassis Cultural Center. These elements form the particular iconic language of an artist who works more in the manner of a poet than that of the painter. They are, as Rudi Fuch notes—“the morphological fragments of a lexicon that substitutes the art of painting”.

Kounellis has recombined and redeployed these elements specifically for this site and for this time. I don’t know if, as the curator argues, this one-act play constitutes a response to our troubled times. But it certainly is a witness to the crisis. Or at least that is how I read it. Kounellis’s work is richly enigmatic and we will each tell a different story. It is in the nature of an installation such as this, something in its theatricality and sheer physicality (including the scent of burning lamp oil), that invites us to narrate. In her Sense and Non-sense of Revolt, Kristeva describes how contemporary art installations call on the spectator not merely to contemplate images but to commune with being. And we do this telling the story of what we sense and experience: “An installation invites us to tell our story, to participate, through it and our sensation, in a communion with being.”

A way of life we have known for decades has been irretrievably lost. It was not in some respects necessarily a good life, but it is the one to which we grew accustomed, and now it is gone, and nothing has come to take its place save for austerity and poverty.  We’re stuck in a seemingly interminable Good Friday, and no one knows in what guise and at what time salvation will come. Most are prepared for worse times. Many economists agree. Political leadership, which trades on optimism, doesn’t, of course. Eighteen months ago the Minister of the Economy assured us 2012 would be a year of modest growth. Instead another contraction of the economy, the fifth in a row, awaits us. Granted, politics is the art of the possible, but most of us have little confidence in the ability of this leadership, or the one that will succeed it after the May elections, and much less the one in Europe that is dictating an increasingly catastrophic “save-till-you-die” austerity program, to bring us out of the crisis. 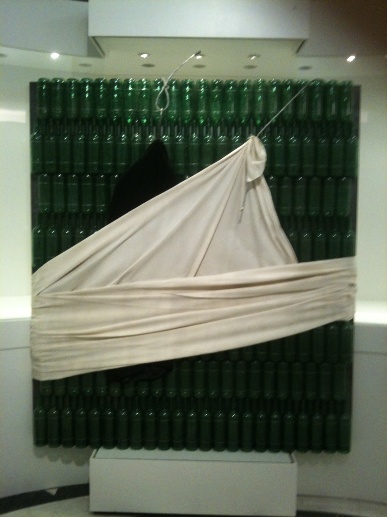 Detail from the exhibition

For Kounellis, however, the problem is not the economy but identity. He says we have lost our sense of who we are. It is broken, like the shattered cast of an ancient statue. Some would argue it was not the crisis that broke it but the cultural estrangement wrought in the hyper-materialist decades that preceded and precipitated the crisis.

Not everything has been lost, though. “They said the same thing after the war and then again after the civil war,” he says, “but the country survived.” Perhaps, as Cavafy wrote, the gods are not dead, though the statues may have been broken and the gods driven out of their temples. (I was reminded of the reference when reading Stefan Beyst’s engrossing essay “Jannis Kounellis: the Metamorphoses of Apollo” )

The last room on the second floor contains the only piece of white cloth in the entire installation. It is wrapped around a tall, broad stack of empty green glass bottles, enclosing in its cincture yet another black overcoat. But unlike the ones in the room of coats, this coat does not seem to point to absence. Maybe it’s the whiteness of the cloth that protectively girds it. Or the way the white canvas cloth resembles a sail. Yes, a sail.

Featured image: detail from the Kounellis installation at the Museum of Cycladic Art

2 responses to ‘Tells of Loss’